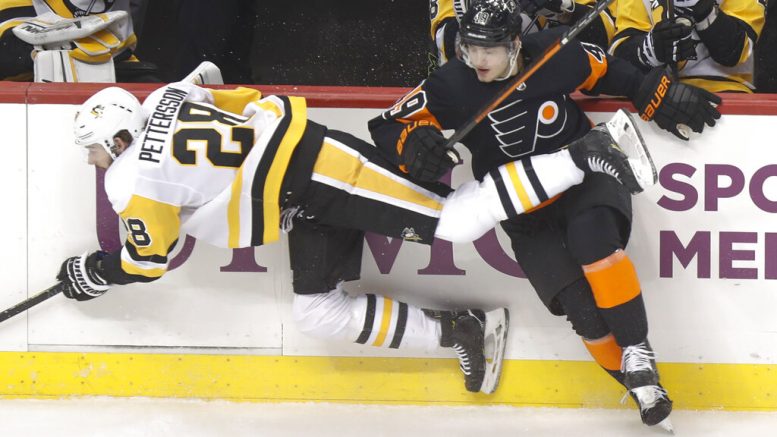 PITTSBURGH (AP) — Sidney Crosby is well versed in what happens during the second half of an NHL season. How the intensity ramps up. The speed and the stakes, too.

No wonder the Pittsburgh Penguins captain looks so comfortable. Crosby’s wrist shot beat Brian Elliott 55 seconds into overtime to give the Penguins a 4-3 victory over Philadelphia on Friday night. Crosby’s ninth goal of the season took some of the sting out of a dismal shutout loss to the Flyers on the eve of the All-Star break.

Given nine days to stew, Crosby promised his team would be ready for the rematch. Though the Penguins needed goaltender Tristan Jarry to bail them out after blowing a two-goal lead, Crosby’s winner gave Pittsburgh’s two-month sprint to the playoffs a jolt.

“I think you always look at this time of year, when your team has to elevate your game, everyone else is doing the same,” said Crosby, who finished with a goal and two assists. “We’re going to try and do that, to come off the break and get those first two points there and build off of that is important.”

Evgeni Malkin also had a goal and two assists for the Penguins, who picked up their NHL-leading 19th home victory. Bryan Rust picked up his team-leading 22nd goal for Pittsburgh and Kris Letang added a goal and an assist. Jarry, fresh of his first All-Star appearance, stopped 27 shots for the Penguins, including a number in the waning minutes of regulation as the Flyers buzzed.

“It’s hard to win in this league when you don’t get that timely save,” Pittsburgh coach Mike Sullivan said. “(Jarry) made a number of them in the third period for us.”

Jakub Voracek, Tyler Pitlick and Scott Laughton scored for Philadelphia. Elliott finished with 16 saves. Matt Niskanen added two assists for the Flyers but Jarry’s late stand pushed the game to extra time and Crosby found enough open ice to sneak one by Elliott for the 16th overtime goal of his career.

“I think we had something like 10 scoring chances (in the third period),” Philadelphia coach Alain Vigneault said. “Should’ve been able to finish it off in regulation. Weren’t able to. Turnover in the OT and we never touched the puck after that.”

Both teams looked sluggish following an extended layoff. The Penguins sent all of three shots Elliott’s way in the first period. The Flyers only managed four on Jarry, but the fourth turned out to be a power-play goal from Voraceck with 27 seconds left in the period.

The Penguins found their legs following the first intermission thanks in part to a couple of fortunate bounces. Malkin tied it 3:55 into the second when Patric Hornqvist’s flip from the top of the zone skipped by Elliott and right to Malkin all alone at the far post. The Russian star settled the puck with his skate then poked it into the net.

Rust needed just 81 seconds to put Pittsburgh in front, a power-play tally that came courtesy of a pass from Crosby, who fed Rust all alone in the slot. Letang capped the Penguins’ outburst by skating in deep and flicking a shot from along the goal line that smacked off an out of position Elliott before bouncing into the goal.

Pitlick pulled the Flyers within one with 3:31 left in the second during a sequence that started with a Letang turnover while trying to clear the zone and ended with Pitlick firing a shot that zipped by Jarry for Pitlick’s fifth of the season. Laughton tied it 2:20 into the third when he collected a redirected puck and beat Jarry, to set up a thrilling finish.

“We definitely turned a corner there from the second to the third,” Elliott said. “It’s good. It’s a big point. We’d like to have two coming out of here, but that’s not the case.”

NOTES: The Penguins held a moment of silence before the opening face-off in honor of fallen basketball icon Kobe Bryant that included the stairwells inside the arena being bathed in purple and gold light. … Pittsburgh paid tribute to Philadelphia’s Oskar Lindblom by wearing T-shirts following the morning skate that read “Oskar Strong.” Lindblom’s career is on hold while he battles a rare form of bone cancer. … The Penguins went 2 for 2 on the power play. The Flyers were 1 for 3 with the man advantage. … Pittsburgh D Justin Schultz skated 16:57 in his return after missing 16 games with a lower-body injury. … Penguins C Anthony Angello played 4:14 in his NHL debut.

Penguins: Face Metropolitan Division rival Washington on Sunday, the first of four meetings between the clubs over the final 30 games of the season.