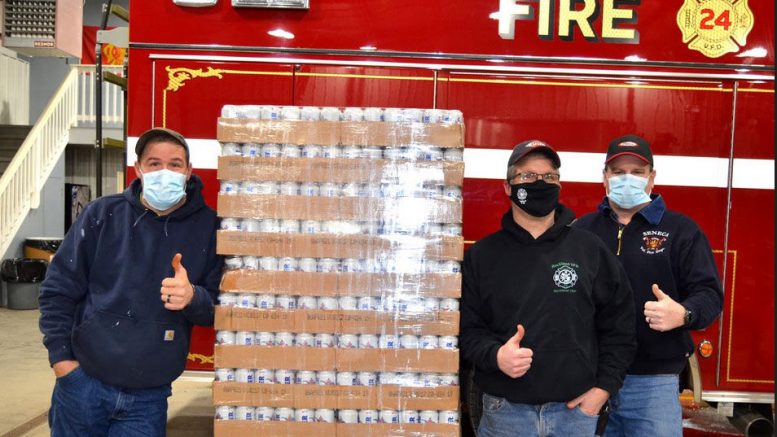 Charlie Lam, Kevin Williams and Paul Marsh Sr., chiefs of the Pinegrove, Rockland and Seneca volunteer fire departments, respectively, stand with some of the canned water that was donated to the fire departments by the National Volunteer Fire Council and Anheuser-Busch. (Submitted photo)

The donation was made to help provide critical hydration to first responders during this year’s wildfire season.

Collectively, these departments serve nearly 9,700 residents within a 159-square-mile area with roughly 75 active members on their rosters. On average, these departments respond to approximately 50 fire-related calls and 15 vegetation-fire calls annually.

All three VFDs protect their respective portions of the Allegheny National Forest, as well as private forests and open wildlands in northwestern Pennsylvania, which are most at risk for vegetation fires during the summer months.

The three VFDs have been working together since 2019 to research and apply for public and private grants in order to reduce costs and demonstrate the ability for responders from differing departments and functional areas to cooperate and communicate effectively at the scene of an incident.

“Firefighters lose a tremendous amount of fluids during high-intensity fire ground operations. Proper hydration is key to ensuring the safety of our first responders and to keeping them performing at their best,” said Mariel Jeannerat, grant coordination team member at Seneca VFD. “We are incredibly thankful for this water donation from Anheuser-Busch and the National Volunteer Fire Council, so that we may have the resources to keep our firefighters hydrated and ready to respond,” Jeannerat said.

From staff reports Christian Life Academy high school students raised money for a program that will benefit people outside their school, and they succeeded beyond…

WASHINGTON (AP) — House Democrats passed sweeping voting and ethics legislation over unanimous Republican opposition, advancing to the Senate what would be the largest overhaul…

The Associated Press Steven Brault can exhale — sort of. For the first time in his major league career, the relentlessly upbeat Pittsburgh Pirates lefty…

The Associated Press You’ve got to love a movie that credits its dogs before it does its executive producers. “The Truffle Hunters,” Michael Dweck and Gregory…

Don’t those soulful eyes capture your heart? Lenny is a very sweet, very humble boy that wants to be with his person so bad! He’s…

(Family Features) Quality meals don’t have to drain hours from your day; satisfying taste is possible in just minutes when you have a few strategies…

From staff reports An Ambridge woman is facing charges for breaking into a garage in Jackson Township. Franklin state police said in a criminal complaint…

HARRISBURG (AP) — With growing emphasis on getting students back in schools, teachers and school staff will receive the first doses delivered to Pennsylvania of…

NEW YORK (AP) — When Eddie Murphy made the original “Coming to America,” he was, almost indisputably, the funniest man in America. Murphy was at…