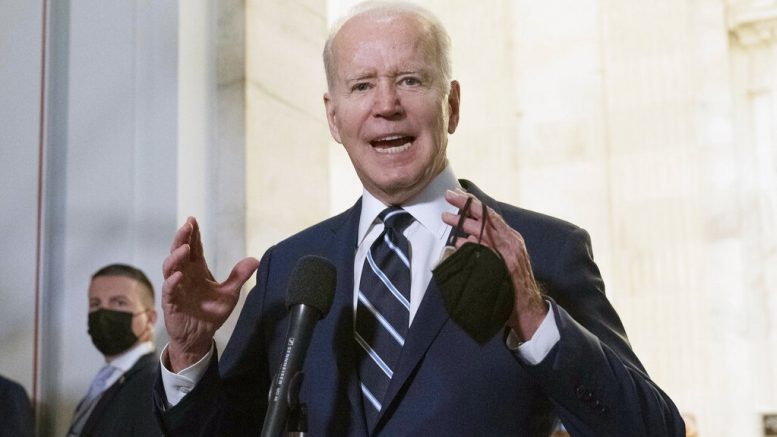 President Joe Biden speaks to the media after meeting privately with Senate Democrats on Thursday, Jan. 13, 2022, on Capitol Hill in Washington. (AP)

WASHINGTON (AP) — President Joe Biden on Wednesday will try to talk anxious Americans through the challenges of delivering on his lengthy to-do list as he holds a rare news conference to mark his first year in office and asks for patience with recent setbacks to his lofty agenda.

In advance of the session, set for 4 p.m. today, his 365th day in office, Biden gave no indication that he felt a reset was in order. But his appearance was playing out on the same day that prolonged Democratic efforts to overhaul the nation’s voter laws appeared set to go down in flames on Capitol Hill and as Biden’s massive social spending package remains stalled.

The East Room event will offer Biden an opportunity to spotlight his accomplishments before a national audience, and he is sure to highlight the bipartisan infrastructure law enacted on his watch, a roaring economy, and the country’s progress against COVID-19.

Still, it is a perilous time for Biden: The nation is gripped by another disruptive surge of virus cases and inflation is at a level not seen in a generation. Biden’s approval rating has fallen sharply over his first year in office and Democrats are bracing for a potential midterm rout if he can’t turn things around.

Biden has held just six solo news conferences during his first year in office. The ongoing threat from the coronavirus will be evident in the very setup of Wednesday’s gathering: A limited number of reporters will be allowed to attend, and all will have to be tested for the virus and wear masks.

The White House said Biden would use his appearance to highlight progress made but also to “level” with the public about the challenges ahead.

“The work is not done, the job is not done, and we are certainly not conveying it is,” White House press secretary Jen Psaki said Tuesday. “So, our objective, and I think what you’ll hear the president talk about tomorrow, is how to build on the foundation we laid in the first year.”

The enduring impact of COVID-19 has become a weight on Biden’s presidency, despite his best efforts to rally the country in common purpose to defeat the virus. As a candidate, he promised to restore normalcy to a pandemic-riven nation, but overcrowded hospitals, shortages at grocery stores, and fierce divisions over vaccine mandates and face mask requirements abound.

On the Senate floor, meanwhile, Democrats are on track to lose a vote to change the chamber’s rules in order to pass voting reform legislation due to the opposition of Democratic Sens. Kyrsten Sinema of Arizona and Joe Manchin of West Virginia. That will underscore the constraints on Biden’s influence barely a week after he delivered an impassioned speech in Atlanta comparing opponents of the measures to segregationists and exhorting senators to action.

And just a month ago, Manchin blocked Biden’s roughly $2 trillion legislation aiming to address climate change, reduce child poverty and expand the social safety net, paid for by new taxes on the wealthy. That bill, which contains much of what Biden hopes will form an enduring domestic legacy, is now on the back burner as Democrats await guidance from Biden on how to proceed.

The bill was once viewed as a catch-all home for various progressive priorities, but now Democrats are sensing the need to deliver another accomplishment to voters in the midterm year and are beginning to come to terms with a slimmed-down package that can overcome Manchin’s reticence.

Senate Democratic whip Dick Durbin encouraged Biden to be “honest and realistic” in his comments to Americans, particularly about the harsh realities of what’s possible in a 50-50 divided Senate where any one lawmaker can block Biden’s agenda.

“We have to have an agenda that is not only appealing to the voters, but is realistic on Capitol Hill,” Durbin, D-Ill., told reporters Tuesday. “It’s OK to have an ambitious agenda, but it has to come down to the harsh reality of producing votes.”

Recent Democratic presidents have engineered course corrections in their first terms after suffering rebukes in the midterm elections. President Bill Clinton shifted in a more moderate direction after getting thumped in 1994; President Barack Obama was forced to recalibrate after acknowledging he’d gotten “shellacked” in the 2010 midterms.

Biden, for his part, is signaling he’s not ready for a major shift in direction after recent policy setbacks. Instead, his White House is promising dogged work to deliver on promises made.

His words will be closely analyzed both at home and abroad, as the U.S. seeks to rally an international coalition to defuse a perilous situation in Eastern Europe.

“We’re now at a stage where Russia could, at any point, launch an attack in Ukraine,” Psaki said Tuesday, reiterating that the U.S. and its allies would impose stiff economic penalties on Russia if it seized any more Ukrainian territory.

“President Biden needs to reassure Americans he understands their economic concerns, particularly around inflation, and that his administration is focused on getting the country back to normal by increasing testing availability, working to keep schools and businesses open, and giving clearer guidance around COVID,” he said.

“He should resist the idea of a victory lap or trying in one event to reframe the present narrative by proving what he has already accomplished and instead live where anxious Americans are, talk about the road ahead and less about the road already traveled,” Gibbs added.