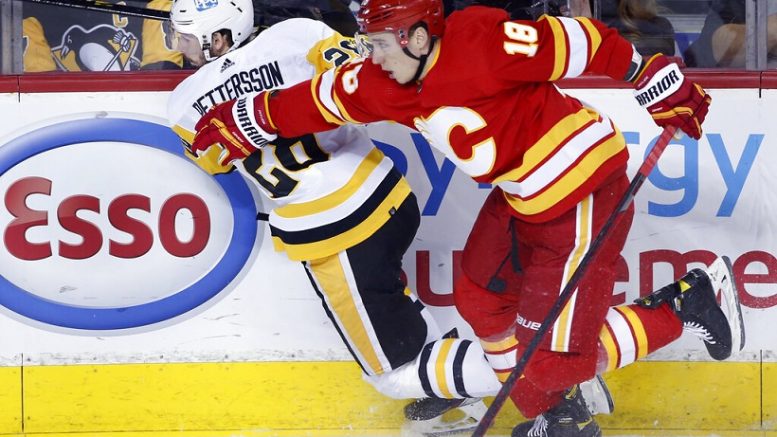 CALGARY, Alberta (AP) — Mikael Backlund scored the deciding goal in the seventh round of a suspenseful shootout and the Calgary Flames beat the Pittsburgh Penguins 2-1 on Monday night after blowing a late lead.

Backlund broke in off the right side and ripped a shot into the top corner over Tristan Jarry’s glove.

“I wasn’t expecting to get picked, really,” Backlund said with a chuckle, pointing to his 0-for-7 record in previous shootouts. “But when I heard my name, I got excited and tried the move I’ve been working on in practice.”

Jacob Markstrom sealed the victory by stopping Brock McGinn on Pittsburgh’s final attempt. The goalie pumped his fist as Flames teammates spilled over the boards to celebrate Calgary’s second victory in extra time.

The Flames’ Johnny Gaudreau and the Penguins’ Kris Letang scored in the third round of the tiebreaker.

Milan Lucic scored in regulation for Calgary, which is 6-1-2 in its last nine games. Markstrom finished with 21 saves to improve to 9-4-4.

Jake Guentzel scored for Pittsburgh, and Jarry had 31 stops while dropping to 10-4-4.

“We didn’t like our game tonight,” Guentzel said. “I think Tristan played an unbelievable game. Kept us in the game all game. We know we have to be better. Just to get a point, I think it’s a big point for us.”

Much like during regulation, Calgary had the better scoring chances in overtime. On one opportunity, Gaudreau hit the crossbar. Then on a 2-on-1, Jarry snared a low shot that looked like the game-winner.

Down 1-0, the Penguins tied it with 7:25 remaining in the third period, quickly converting the first power play of the night for either team. With Backlund in the penalty box for interference after he hauled down Evan Rodrigues at the side of the Flames net, Pittsburgh needed only seven seconds to draw even against the NHL’s second-best penalty-killing unit.

Sidney Crosby won the faceoff and got the puck back from Letang before sending a diagonal pass through the slot that was redirected by Guentzel past Markstrom. The power-play goal extended Guentzel’s point streak to 10 games. He also has at least one point in all 10 road games this season.

“Stupid penalty,” Backlund said. “My emotions got the best of me there in front of the net. It’s tough to go to the box when you’re up one late in the game and then when they score right away, it’s hard. Then when I got the chance, I was excited to get a chance to redeem myself.”

The Flames had killed off 26 of the previous 27 penalties.

Calgary did not get a chance on the power play, which would have pit the Flames against the NHL’s No. 1 penalty-killing team.

Approaching the halfway point of the second period and with the game scoreless despite Calgary producing a majority of the scoring chances, the Flames finally broke through against Jarry.

Oliver Kylington’s long pass up the side boards was neatly chipped by Lucic past the tight coverage of defenseman Chad Ruhwedel. As he retrieved the puck and stormed into the Penguins end to chants of “Looooch” from the Saddledome crowd, Lucic snapped his sixth goal of the season through Jarry’s pads.

Until that point, the Flames had done everything but score.

Gaudreau and Trevor Lewis hit the post. Andrew Mangiapane whiffed on a cross-crease feed from Blake Coleman with an open side to shoot the puck into. Backlund and Elias Lindholm put dangerous rebound chances past open nets.

“They play a high-pressure game. They put a lot of pucks in deep. You’ve got to be able to handle their pressure and I didn’t think we did very well tonight,” Penguins coach Mike Sullivan said.

Calgary swept the season series after winning 4-0 in Pittsburgh on Oct. 28, but the two games were in stark contrast. Last time, the Penguins put 45 shots on goal. They were held to less than half that this time.

“We played a little too loose in Pittsburgh but we got away with one, and today, puck possession was better, zone time was better,” Lucic said. “That’s a good sign that we’re able to adjust and zone in on what our jobs are to give us success in the checking part of the game.”

NOTES: Mangiapane played in career game No. 200, as did Pittsburgh forward Dominik Simon. … Calgary has only trailed after two periods twice all season (0-1-1). … Flames D Juuso Valimaki has been a healthy scratch in 14 of the last 15 games. … The Penguins are 21-5-5 in Western Canada dating to 2007-08.

Penguins: At Edmonton on Wednesday night in the second of a stretch of five straight road games.

Flames: At Los Angeles on Thursday night in the opener of a four-game trip.